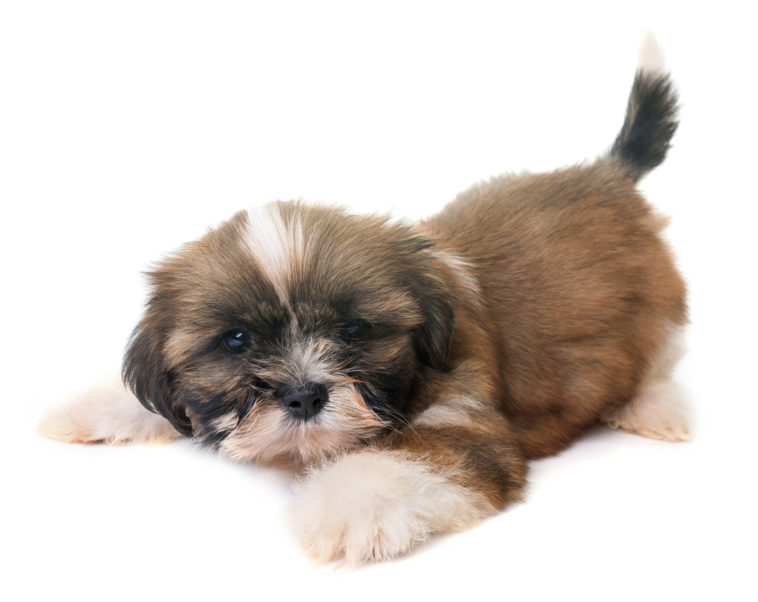 Just about everyone loves Shih Tzus and why not? They are cute and cuddly and love their owners. Not to mention they are super loyal and make great lap dogs. So, it’s no wonder you might be considering buying one, but how much does a Shih Tzu cost? There’s a pretty big price range, so let’s check it out.

How Much Does a Shih Tzu Cost

The cost of a Shih Tzu is going to depend on where you buy it and also if you get a puppy or an adult Shih Tzu.

Let’s take a look at your options.

1. From a Reputable Breeder

If you decide to go through a breeder then you’re going to pay more than you would if you purchase your puppy in another way.

That may sound like a lot but the expenses of breeding puppies can be quite high. Surpisingly the breeder doesn’t actually make that much money from the sale of a Shih Tzu puppy.

Not to mention the parents of the puppy will be health tested and the breeder will have a good idea of the temperament of the male and female parent dogs.

You have more information about the background of the puppy and the line of dogs and the puppy’s genealogy.

Also, the breeders will make pairings of male and female Shih Tzus that will produce the best quality and healthiest puppy possible.

In addition, the breeder will send the puppy home with their shots, dewormed and a microchip inserted.

The puppy won’t be spayed or neutered, so that’s something you’ll need to do later on.

Of course, if you’re going through breeders to buy a Shih Tzu from a champion line you can expect to pay even more.

Unless you’re planning to show your Shih Tzu, it’s really not necessary to spend this much for your Shih Tzu.

Also, keep in mind that the average Shih Tzu litter number is 3 puppies.

This means you may have to wait for a puppy.

I know that my Truman (learn more about Truman here) was a litter of one.

The average price you’ll pay at a rescue for a Shih Tzu is about $350.

Depending on the rescue and maybe as low as $250.

I know that is what I paid for my rescue Shih Tzu, Sammy (learn more about Sammy here.)

Typically they charge enough to cover all their expenses related to the care and health of the puppy or adult Shih Tzu.

Of course, you won’t know the background of the dog.

Again if you’re not showing the dog, that’s really not an issue.

I got one of my Shih Tzus through a rescue organization called petfinder.com.

She is actually half Shih Tzu and half Pekingese.

She’s the sweetest dog ever.

Of course, I couldn’t have her registered, nor could I show her but as a family pet, she’s just perfect.

So, if you’re just looking for a great pet and not a show dog, then a rescue Shih Tzu is really the best way to go.

And at petfinder.com they have all types of Shih Tzus.

You can find adult dogs, senior Shih Tzus, and even puppies.

If you don’t want to have to train your Shih Tzu you can find one that’s already housebroken and even knows a bunch of tricks.

Not to mention, you’ve saved the dog and given it its new forever home.

When you do purchase a Shih Tzu through a rescue organization the dog will come with its shots, be dewormed, and most likely spayed or neutered.

3. From the Newspaper or Online

One of the cheapest ways to get a Shih Tzu puppy is from an ad in the newspaper or online such as Craigslist.

You can find Shih Tzu puppies for as little as $250.

The puppy price is going to depend on who’s selling the dog in the ad.

If it’s a responsible breeder the cost will be higher.

If it’s just some Joe Schmo selling a puppy it might be a lot less.

Typically some of the vet expenses will have already been taken care of such as shots and dewormed if it is a breeder selling the puppy.

Most likely the puppy will not be spayed or neutered so you will have that medical care to deal with down the line.

Keep in mind that Facebook no longer allows the selling of live animals so you won’t find any ads there.

It’s also possible that the puppies you buy online or from an ad may not have received much if any veterinary care if it is just some random person selling a puppy.

That means you won’t know if the puppy has any health issues or health conditions or health risks that will cause you a great deal of money down the line.

There is a good chance you won’t know anything about the Shih Tzu puppy’s parents either.

This is about the worst way you can buy a Shih Tzu puppy.

Many pet stores no longer sell puppies as they were getting them from puppy mills.

A puppy raised in a puppy mill will have little to no contact with humans.

It will be raised in a cage in terrible conditions and even have to sleep in its own feces.

These poor little puppies typically have terrible health issues and will have received no medical attention or health checks.

Once the general public learned of how these puppies were raised, there was a pretty big outcry and that’s why most pet stores no longer sell them.

Some states have outlawed the practice altogether.

Not to mention when pet stores do sell puppies they tend to be expensive puppies that have high medical expenses down the line.

Even so, your goal shouldn’t be to find cheap puppies.

Instead, as future pet owners, it should be to either rescue a Shih Tzu or buy one from someone you can trust to have the dog’s best interest and well-being at heart.

How Much is a Shih Tzu – Future Costs

Once you purchase the Shih Tzu puppy or adult dog your expenses don’t stop there.

There are a lot of ongoing costs when it comes to having a dog of any breed.

The annual cost can really add up over time so you want to make sure you can afford good health care and all the rest that comes with owning a Shih Tzu.

The truth is Shih Tzus are not the most healthy breed.

Not only can they have medical issues they can also have dental disease.

Shih Tzus always have issues with their teeth so dental care is an expense you’re going to have to deal with at some point.

In addition, they can have some or all of the following issues:

He’s had pretty much all of these issues listed above.

He’s had bad teeth. He has eye issues and he had a serious back issue which is pretty common.

His back issue could have led to his back legs becoming paralyzed.

Luckily, he got through it without any serious consequences.

Now that he’s older he has hip dysplasia and arthritis

He has eye issues and even has doggy dementia.

So expect some ongoing and possible future health issues with your Shih Tzu and know that they’re going to cost you.

What Should I Know About Shih Tzu Dogs Before I Decide to Get One?

Can a Shih Tzu be a Service Dog?

Cost of Supplies When Bringing Your New Puppy Home

You will need a whole host of items for your new Shih Tzu puppy when you bring them home.

Then of course you need to consider the extra costs, beyond any medical cost, of having this adorable addition to your family.

Here are some you should keep in mind:

You will also need to decide whether or not you want to purchase pet health insurance.

Shih Tzus live between 10 and 16 years with an average lifespan of 13 years although some will live over 16 years like my Truman.

How Much Does a Shih Tzu Cost at PetSmart?

When it comes to how much are Shih Tzu puppies, the purchase price is less important than making sure you are looking at healthy puppies. If not, your costs will be much higher down the road. Purebred puppies tend to have more health issues, so you might want to consider a mixed breed instead. Just keep in mind, the price of puppies depends on who you buy one from and what the puppy’s background is. The purchase cost shouldn’t be as important as finding a great puppy your family can love.